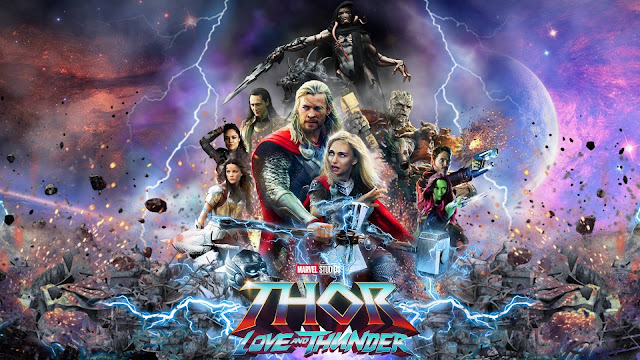 Thor: Love and Thunder is proving to be a very divisive film.  The 29th film in the sprawling Marvel Cinematic Universe is a "classic Thor Adventure."  The stakes feel smaller.  It's not an Avengers level threat.  It's a breezy silly time that truly showcases Taika Waititi's quirky humor.

Chris Hemsworth's take on the classic comic book character continues to evolve from the stoic loud mouthed braggart of the first film to the badass comedian of Ragnarok.  This film picks up following the events of Avengers: Endgame with Thor and the Guardians of the Galaxy on missions to answer distress calls.  When Christian Bale's Gorr the God Butcher shows up, Thor has to head to New Asgard to help King Valkyrie put an end to the devastation.  When he arrives, he realizes that he's no longer the only Thor.  His former flame Jane Foster, has somehow gained the powers and become the Mighty Thor!  She's not Lady Thor, she's the Mighty Thor!

There's a lot to love about this movie, especially if you enjoyed the humor of Ragnarok.  This film pushes it to the max.  If you believe that Marvel undermines the drama of the story with their humor, you're maybe not going to like it as much.  This has more jokes than most comedies.  For me, more of them landed than didn't.  Your mileage may vary.

The other point of contention that this film presents is that "Marvel is too WOKE now."  If a handful of LGBTQ+ characters is "shoving it down your throat," it's not Marvel that's the problem.  It's you and your prejudice is showing.

Thor: Love and Thunder is a great Guns 'n' Roses compilation video.  There are 4 GNR songs used in the film.  Two of them prove super effective.  The other two are more distracting than not.

Overall, Thor: Love and Thunder is the second best solo Thor movie.  It doesn't quite reach the perfect blend of comedy and action that Ragnarok pulls off, but it's pretty damn close.  It continues the story of a fan favorite character and doesn't put him in yet another world ending threat.  As they mention in the film, it's just a small scale fun Thor adventure.  And those are a nice breath of fresh air.  At less than two hours, this one flies by and is nothing more than a fun silly time.