The ever expanding world of the Marvel Cinematic Universe can be a confusing and overwhelming experience.  With multiple films (14 currently), TV shows, one shots and tie in comics, we're going to take a minute to break down how to get started in the MCU and what should be watched (and what can be skipped).  Do you really have to watch everything to get something out of the story?  No.  You don't.  We're here to point you in the right direction.

With Marvel being one of the biggest comic book publishers in the world with a vast roster of colorful characters, it's easy to get lost on who is included in the MCU and who isn't.  Not all of the Marvel Comics characters are able to be used in the Marvel Studios produced films.  This is due to the fact that different companies own different character's film rights.  In the 90's, Marvel Comics sold off the film rights to several characters to avoid bankruptcy.  While it did manage to save the company, it limited what their future film division could use.

Here is a handy infographic that should help out.

As you can see, the characters are split up between 4 major studios.  While Marvel Studios has the rights to most of the characters, other companies own the most popular.  20th Century Fox owns the rights to the X-Men characters (including Deadpool) and the Fantastic Four.  Universal owns the rights to Namor.  Sony has Spider-Man.  You may notice that Scarlet Witch and Quicksilver overlap.  This is because of a weird loophole.  Technically since Quicksilver and Scarlet Witch are mutants, they belong to Fox.  However, they both have a long history as members of the Avengers which gives Marvel Studios the rights to use them.  The Sony bubble also overlaps with Marvel because the two companies came to an agreement in February 2015 that allows Marvel to produce Spider-Man films that do incorporate him into the MCU.    This means that any Spider-Man films that predate February 2015 are not part of the MCU.

These companies have a clause in their deals that require them to start production on a film featuring their Marvel characters within a certain period of time.  If they don't, the film rights revert back to Marvel.  It's why certain franchise are rebooted so often (Spider-Man/Fantastic Four).  Some characters that are now part of the MCU weren't previously.  For example, Fox let the rights to Daredevil lapse which then reverted back to Marvel.  It won't be surprising if at some point in the future the Fantastic Four return to Marvel.  They would be wise to strike up a deal similar to Sony after their most recent flop of a Fantastic Four film.  All the moving parts can be kind of confusing but that's why we're here. 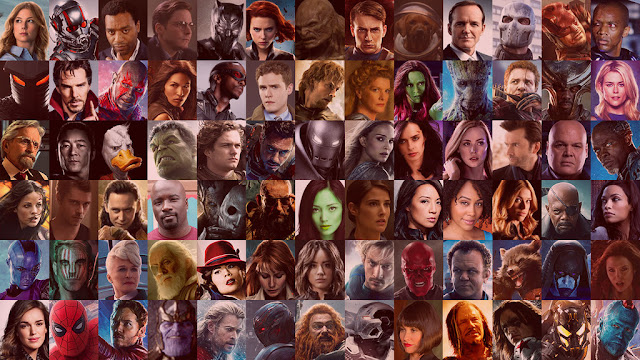 Here's a breakdown of which franchises are included in the Marvel Cinematic Universe.  Any film that features a Marvel character that was released prior to 2008 is not included.

As you can see, that's a lot of characters that Marvel Studios has in current development for their shared cinematic universe.  This isn't including any minor characters that Marvel can and have used (such as Howard the Duck or Elektra).  This is only properties that have at least one film (or TV series) dedicated to it or have one in active production currently.


In our next part of the guide, we'll take a look at the films of the MCU.  Stay tuned.