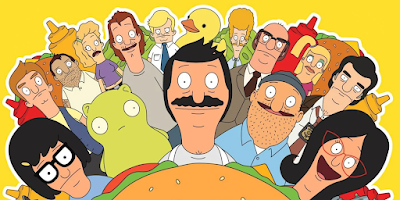 As someone who doesn't know much about Bob's Burgers, I was curious to see how this film would play out for a non fan.  Don't get me wrong, I don't hate the television show that has ran for 12 seasons.  It's one of those shows that I'll gladly watch if it's on but I won't seek it out.  Everybody has one of those shows.  For me, it's this one.  So can someone who doesn't know much about it enjoy it?
The Bob's Burgers Movie tells the story of a family that is just trying to make it through the day.  There's a sense of realism to it that makes it relatable.  While of course they embark on crazy adventures, the basis of the story is very real.  The Belcher family is facing the closure of their business.  They're trying to find a way to simply survive.  This is something that most American families these days can relate to.
With that understandable plot point, the family goes on a ridiculous mission to survive.  What's great about this film is that each of the members of the family have their own drama that they're trying to overcome.  Except mother Linda.  She seems to exist only to provide the positivity to encourage the family that a brighter day is coming.  Is this true to her character in the show?  I wouldn't know having watched only a few episodes.  In the context of the film though, it seems out of place since every other Belcher has a subplot.
The Bob's Burgers Movie is also part musical.  The songs in the film are fantastic.  It adds an extra dimension to it that I was totally not expecting.
Directors Loren Bouchard and Bernard Derriman have brought us a fantastic story of a family that we can both root for and relate to.  It's clear that while this family may not necessarily like each other, they definitely love one another.  It's a very wholesome statement that doesn't come off as lame.  It's just a fun feel good movie that at only 1 hour 42 minutes doesn't overstay it's welcome.
So to answer the question that I posed at the beginning of this review, yes.  Someone with very little knowledge of the TV show can absolutely enjoy this film.  It's not a movie that's going to "change cinema," but then, do all movies have to be that?  Can't some just be fun?
3.5 Graduating Bananas Out of 5
2022 3.5 Star Movies Animated Bernard Derriman Bob's Burgers Cartoon Loren Bouchard Movie Reviews review TV