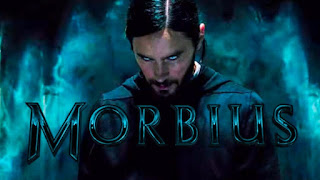 It's Morbin' Time huh?  Yep.  The memes surrounding this one are just about the best thing about this movie.

Let's get one thing out in the open.  Jared Leto does not do a bad job as Dr. Michael Morbius.  He looks the part.  And that's about as far as I'll go with it.  What he was given was complete garbage.  With as many delays as this film had, you'd think that Sony could have pulled off something.  Instead, they spent $75 million on this.  It's clear that they had no idea what they were doing.  It's like they watched some early 2000's super hero movies and thought "that's what the kids want."  But let me tell you something Mr. Sony.  The kids do not want this.  Not at all.

There's so many plot threads that go nowhere.  Morbius' power set is never fully explained.  Does the blood turn him into a dracula or does it keep him from becoming a dracula?  He can make a fist out of bats?  What the fuck?

And while I should spoil the mid and post credit scenes, I won't.  I'm a nice guy.  Look it up on Youtube if you're interested instead of sitting through this boring waste of time.  It's the only thing worth watching.  And it's only worth watching to see how NOT to do a post credit scene.  It makes absolutely no sense and only serves to tie it into the Marvel Cinematic Universe.  Sony is so anxious to build their Sinister Six that they're attempting anything they can, no matter how completely stupid it is.

And what universe does this take place in?  Is it the Venomverse?  Venom gets a couple of mentions in this film.  Is there a Spider-Man in this universe?  It stands to reason that there should be.  Does any of that matter?  Not really.  There's no way that Morbius will get a sequel.  I could see him popping up in a team up movie though.  Hopefully Marvel and Sony can work out a deal and get him into the upcoming Blade film just so we can see Blade cut off this dracula's head.  That's what he deserves.

Matt Smith is fun as Milo.  Which isn't even his name!  This movie makes no sense.  In a bad way.

Man!  This movie just angries up my nerd blood.