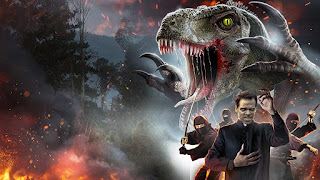 This may be the best worst movie ever.  It takes skill to know how to make a movie this terrible.  From unfinished special effects to hideous practical effects and ridiculous CGI, this film is a complete and utter mess.  The lighting is bad.  The acting is bad.  The cinematography is bad.  Discount Benedict Cumberbatch (as Doug) chews up every scene he's in.  He knows how bad this is and he's giving it his all.  Bargain bin Jennifer Lawrence (as Carol) is just as good in this.
Yes, this is a terrible movie.  It's also one of the best things ever made.  It is legitimately hilarious.  There's ninjas, a dinosaur, bad everything and more laughing than legally allowed.  There's one particular scene early on with the ninjas and I could not stop laughing.
While it's said that this film cost $35,000 to produce, I have my doubts.  It feels like it was made for $16, a carton of Marlboro reds and a case of Mike's Hard Lemonade.  The climatic final battle looks like it was filmed in someone's backyard.  There's a huge late 90's/early 00's home movie feel to this.  It's bad.  So, so bad.  It also may be one of my favorite movies of the last 10 years.
Track this one down and watch it immediately.
17 Frankie Mermaids out of 5
2017 5 Star Movies b movie Benedict Cumberbatch cult horror Horror Movie jennifer lawrence velocipastor