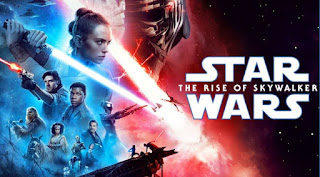 Ahh.  Finally got to the last chapter in the Star Wars Skywalker saga.  This one has had a very polar response.  You know what though?  It's good.  It's the best of the sequel trilogy (with The Last Jedi a close second).  For the first time in the new trilogy of Star Wars films, I actually cared about the new characters.  Now before we go on, let me say that I'm not a huge Star Wars fan.  I like 'em.  I've seen 'em, but it's not my be all end all.
Kylo Ren was less doofy this time around.  Finn and Poe felt like real characters now.  Rey was a good lead.  I could nitpick all day long about some of the story beats being repeated from previous movies and some questionable villain choices, but this film felt like a nice wrap up of the 9 story saga.  The Force Awakens was too much like the original trilogy and relied too much on the original characters.  It was basically a retread.  The Last Jedi did a 180 and pissed off a lot of the fan base.  The Rise of Skywalker was a nice mix of the two and felt satisfying.
While none of the new trilogy recaptures the magic of the original trilogy, The Rise of Skywalker comes closest.  This one feels like a Star Wars and brings in elements from all three trilogies and ties them up nicely.
2019 Movie Reviews sci fi star wars