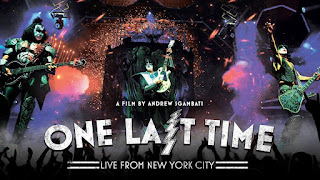 One Last Time Live From New York City is a fan made film detailing a fan's journey with the iconic rock band KISS on their End of the Road world tour.  Director Andrew Sgambati filmed his journey following the band through several dates on their final tour while also including his own personal history and connection to the band.
Some will say this is a puff piece.  They're not wrong.  It is.  Though it doesn't ever try to be anything that it isn't.  It's a love letter to a band that has meant everything to one of it's fans for so long.  The film uses copious amounts of live footage mixed with TV and radio interview segments from the band to talk about the band's 45 year career, though the focus is clearly on the present.  While there is archival footage featuring former members of the band, strangely, no past member is mentioned by name.
One Last Time Live From New York City is a fantastic fan documentary.  It's use of some killer live footage is the highlight while the fan interactions show what this band has meant to a lot of people over the years.
When the house lights come up and the show is over for the last time, KISS fans the world over will at least still have the catalog of songs that often gets overshadowed with the production of the KISS show.  That's something that this film illustrated nicely.  KISS is more than the make up and bombastic stage show.  Beneath it all remains the foundation of some classic rock that has and will continue to stand the test of time.
3.5 Love Guns out of 5
Watch One Last Time Live From New York City now on YouTube!
3.5 Star Movies Andrew Sgambati Concert concerts documentary Eric Singer Gene Simmons KISS live music Movie Reviews Paul Stanley Tommy Thayer