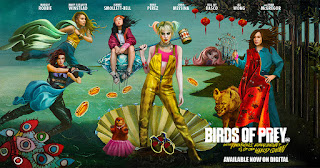 The most recent DC comic book film to be released didn't get the fair shake that it deserved.  Now, everyone knows I'm more of a Marvel guy, but it's also no secret that I'm just a fan of the comic book movie genre.  Birds of Prey (or Harley Quinn and Birds of Prey or Birds of Prey (and the Fantabulous Emancipation of One Harley Quinn)) is a solid fun romp through the origins of the all female anti hero team.
Birds of Prey is what Suicide Squad should have been.  It starts of heavily relying on the origins of Harley Quinn and her relationship to the Joker.  I enjoy the fact that the Joker isn't really featured.  He's only talked about.  After the metaphorical and literal exorcism of her relationship with the crown prince of crime, the film really takes off and builds the team and new relationships with a group of ladies who's combined desires bring them together.  It's great that despite it being an "origin story" for the team, the ladies (Quinn, the Huntress and Black Canary) all had their powers and skills ready to go.
This isn't a superhero film for kids.  The level of violence and profanity is definitely geared towards adults.  Most importantly though, Birds of Prey is FUN.  With the disparity of quality in the DCEU, Birds of Prey stands alongside Wonder Woman and Shazzam as the best comic book movies in their franchise.
2020 anti heroes Comic Book Movies DC dceu margot robbie Movie Reviews super heroes