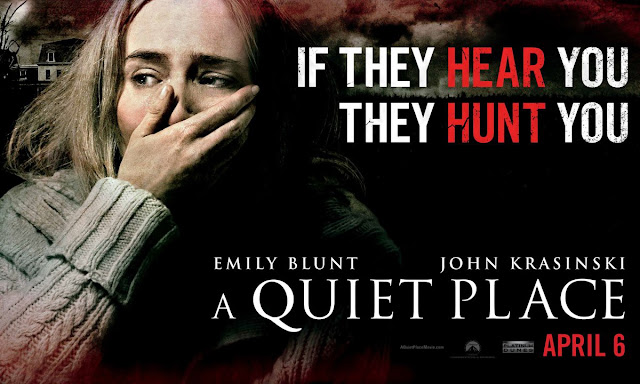 While on lock down, I decided to catch up on some flicks that I've missed out on.  First on the agenda was 2018's A Quiet Place.  This thriller/horror marks John Krasinski's directorial debut, and I've gotta say, he nails it pretty well.

The premise is that, as you can see in the image above, "if they hear you, they hunt you."  The "they" that's referred to are strange alien type creatures that, while blind prove themselves to be deadly hunters.  There's not much of a body count here.  The film instead plays on the suspense throughout.

There's only 7 actors in this film.  It's set on a remote farm and there's very little spoken dialog.  It's strange at first but quickly becomes immersive.  There's a few elements that had me turn away from the screen every time the location showed up.  Let's just say that walking down stairs provided some of the most impactful suspense.

The small cast works quite well together.  The chemistry between Krasinski and (real life wife) Emily Blunt works perfectly here.  Unlike in a lot of horror films (and films in general), the child actors do a great job with the material.  They feel like a real family unit.

You can't tell that this film was shot on a budget of only 17 million.  In terms of Hollywood, this is basically pocket change.  Krasinski and crew made a beautiful film with fantastic creature effects.

For people who believe that there's no good horror coming out, give these new films a chance and you'll be pleasantly surprised.