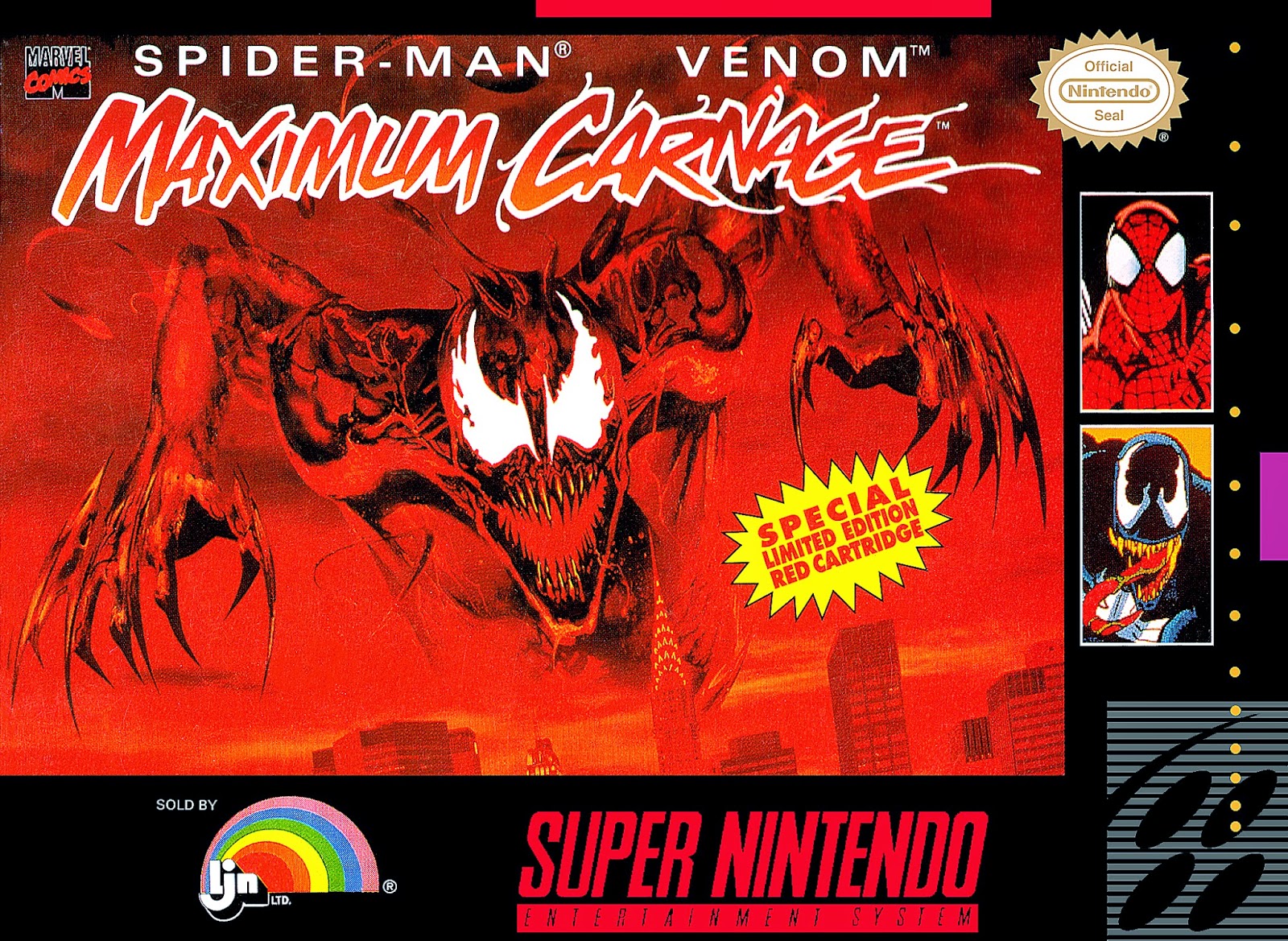 It’s SUPERHERO SUNDAY!  At least that’s what I’m calling it since I’m talking about my all time favorite superhero!

The first game I wanted to revisit was the best Spider-Man game from a retro system.  Spider-man hasn’t been too lucky with video game adaptations.  Most of ‘em suck.  Hard.  Finally, he got a decent one on the SNES and Genesis systems.  And it was brought to us by LJN!  What is this bizarro world??

Spider-Man and Venom: Maximum Carnage is a great beat ‘em up button masher.  There’s not too much skill involved.  It’s just a matter of beating down a shit ton of generic thugs while advancing through the first comic story arc translation.  That’s right, this game holds the distinction of being the first video game based on a specific story arc and not just the character in general.  It does a great job of translating the elements of the story through the use of cut scenes that were ripped straight out of the comic book. 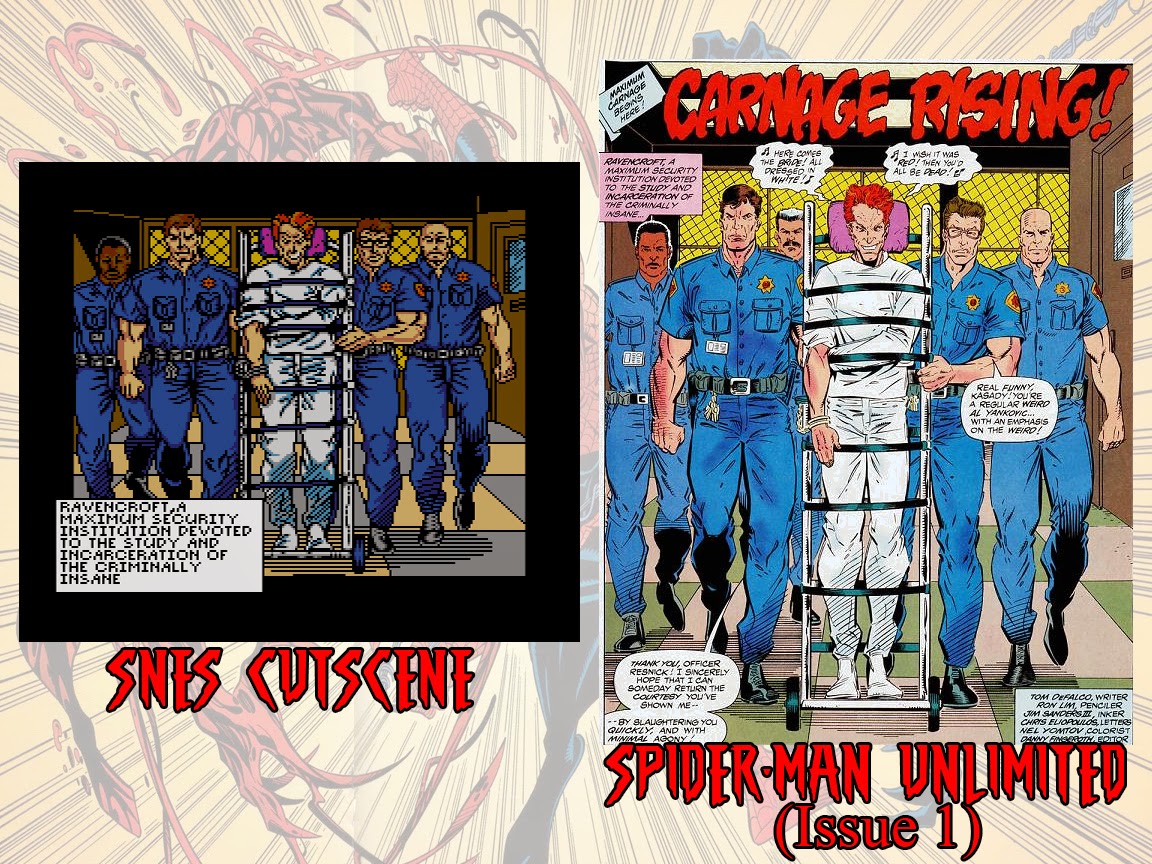 This game is hard as hell.  There are no unlimited continues.  If you don’t find the hidden continues and extra lives scattered through the levels, you’ll be hard pressed to advance very far.  In fact, it took me a good while just to make it far enough to unlock Venom.  I've still never made it to Carnage! 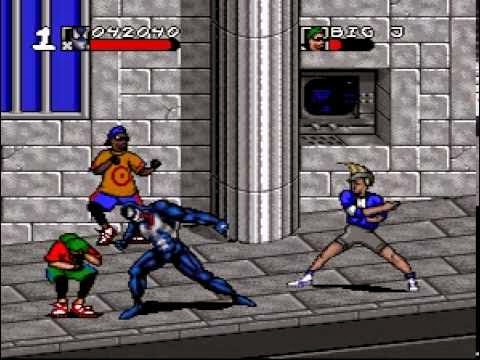 The game is very reminiscent of great button mashers like Turtles in Time.  There’s something very cathartic about going through and just beating down the random generic thugs that you come into contact with.  There’s plenty of boss battles to spice things up and a ton of cameos from other Marvel superheroes.  As mentioned above, there’s loads of continues and 1-ups scattered throughout the levels, and being able to play as Spider-Man or Venom provides this one with plenty of replayability. 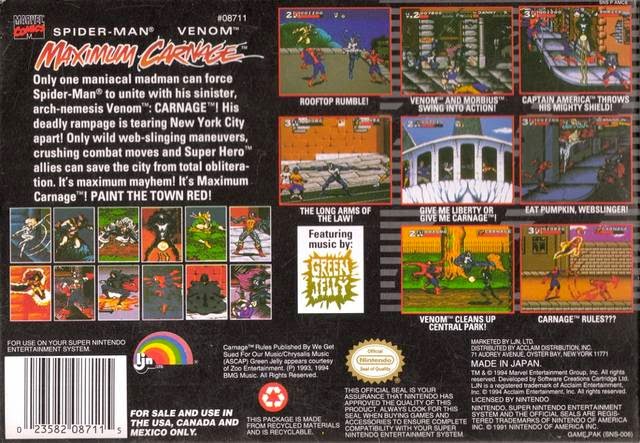 If you’re looking for a great mindless beat ‘em up for the SNES or Sega Genesis, you could do far worse than picking up this one.  It’s got good graphics, decent controls, a great story and a soundtrack by rock band Green Jelly.  That’s a recipe for awesome right there.  And it’s goddamn Spider-Man!  What more can you ask for you greedy bastard?

What do you think?  Do you remember this game?  Did you love it or hate it?  What’s your favorite Spider-Man game?  Hit the comments below and let me know what you think!
Comic Books comics flashback games marvel nintendo nostalgia retro snes spider-man spiderman super nintendo venom video game Video Games